VBSR Public Servant of the Year 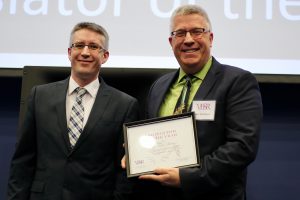 Vermont Businesses for Social Responsibility (VBSR) honored Rep. Tom Stevens, D-Waterbury, at a legislative breakfast next week for his work to raise the state’s minimum wage and establish a paid family leave system in Vermont.

“Rep. Stevens helped shepherd these two bills through the House,” said Jane Campbell, VBSR Executive Director. “He presented detailed and data-driven arguments for both these bills while also outlining why the legislature needed to take these actions – to improve the lives of working Vermonters and help support sustainable business practices.”

Stevens, the vice-chair of the House Committee on General, Housing, and Military Affairs, worked with VBSR and other organizations during the 2018 legislative session to craft bills that would improve the lives of working Vermonters and recognize the economic constraints of small businesses in Vermont. The two bills, S.40 (increasing the minimum wage) and H.196 (establishing a paid family leave system), were ultimately vetoed by the Governor.

“I am extremely honored to receive this award,” said Rep. Stevens. “I appreciate – and am not surprised – that the businesses that belong to VBSR support family friendly policies like minimum wage and paid family leave. The work we do to lift the economic boats for those left behind, and for developing a policy like paid family leave that promises to relieve some of the stress when caring for children and elder parents, reflects the beliefs we hold when we work to provide the tools for small businesses to help make Vermont a place that works for all of us.”

First elected to the Vermont House in 2008, Rep. Stevens quickly made a reputation for himself as a thoughtful and savvy legislator known for bringing an artistic and literary flair to policy debates and proceedings in the Vermont House. Rep. Stevens was the co-chair of the Vermont Liquor Control System Modernization Study Committee and served on the Merger Committee for Liquor and Lottery. He also serves as president of the board of trustees of Downstreet Housing and Community Development. Rep. Stevens lives in Waterbury with his wife, Liz Schlegel.

“Tom Stevens represents me both as a resident of Waterbury and as a Vermont business-owner. I applaud his commitment to using the power of government and business to help everyday Vermonters,” said Duane Peterson, the co-president of SunCommon and a member of VBSR’s Board of Directors. “Providing them with decent wages and time to spend with their families are policies that my Representative will bring about, evidence of his vision for a caring society.  I’m really pleased that VBSR is recognizing his impressive contributions.”

Past VBSR Legislator of the Year Awardees