Addressing the Violence at the US Capitol and Beyond 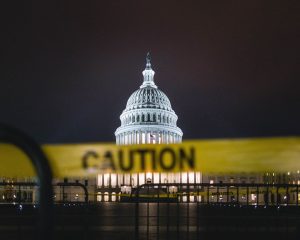 The first week of the 2021 legislative session was one of both hope and immense strife. While a new cadre of Vermont legislators took to the halls of the digital statehouse, our nation watched in horror as armed insurrectionists stormed the United States Capitol in Washington, DC.

Lawmakers and their staff sought shelter from white supremacists and domestic terrorists determined to use violence, destruction, and fear as a means to disrupt our democracy and undermine the results of a free and fair election. Adding insult to injury, law enforcement failed to meet the moment. Their response paled in comparison to what we saw during the Black Lives Matter movement earlier this summer and gave us yet another look at systemic racism at work.

VBSR decries last week’s violence and we thank Congress, especially our own Senators Leahy and Sanders and Congressman Welch, for pressing onward and certifying the results of the 2020 election despite the horrors of the day. There is still more to be done to ensure those responsible for this attack are held accountable, but we’re inspired to see that even a mob could not silence the voices of millions of Americans.

Our democracy is built on a foundation of truth, justice, and community, and it must endure. The horrific injustice that takes place in this country cannot be met with passivity or performative allyship, but with action marked by empathy and compassion. It’s time to start healing this country and working together to recenter the needs of those yearning for liberation and equality – not those sowing division and hatred.