With Planned Growth on Hold, the Skinny Pancake Doubles Down on Strengthening Local Food Systems

Benjy Adler turned 39 on Friday, March 13. It was an ominous time.

Six days earlier, the state of Vermont announced its first case of the coronavirus. Three days after Adler’s birthday, Gov. Phil Scott ordered all restaurants in the state to stop offering in-house dining, effective the next day, to curb the spread of the virus.

These events presented a particular challenge for Adler, who is cofounder, co-owner and CEO of the Skinny Pancake. He and his brother, Jonny, started the business in 2003, when Adler was a music major at Middlebury College on summer vacation. The Skinny Pancake grew from a crêpe cart on the Church Street Marketplace to a local restaurant group that in mid-March this year had 10 permanent or seasonal locations and a staff of about 235 people.

On the night of his 39th birthday, Adler took time for dinner with his family — lamb chops, salad, potatoes and red wine. He knew the days and weeks ahead would bring substantial change to the restaurant industry.

At the Skinny Pancake, a remarkable transformation occurred over the next two weeks. The restaurant group closed its locations to all business, including takeout, and launched an initiative from its Winooski commissary kitchen, ShiftMeals, to provide food for suddenly unemployed and otherwise vulnerable Vermonters.

“It was an easy first step,” Adler said. “We just started producing food.”

The welfare of restaurant workers particularly concerned him. “We had 234 people who were counting on paychecks, and we needed to help them answer what comes next,” Adler said. 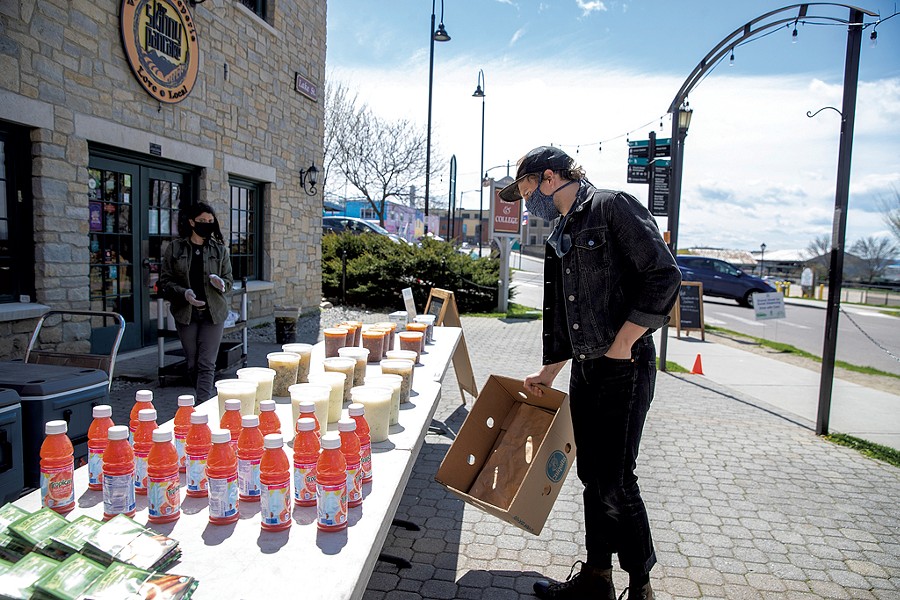 ShiftMeals outside the Skinny Pancake in Burlington in May – FILE: JAMES BUCK

As the company offered free meals outside its crêperie on Lake Street in Burlington, it was losing money. In the last two weeks of March, the Skinny Pancake lost $340,000, Adler said. Since then, the business lost roughly $118,000 a month through July, for a pandemic-induced deficit of about $815,000. Adler is still confident the company has sufficient cash reserves to sustain itself until next summer, he said, due to state and federal grants and loans, including a U.S. Paycheck Protection Program loan of $1.2 million.

This year was meant to be one of growth for the Skinny Pancake. Adler’s business plan — which he expects to pursue in 2021 or 2022 — calls for opening three restaurants a year as the company expands out of state. The goal is to develop and strengthen local food systems in other areas of the Northeast.

Instead, the Skinny Pancake is addressing the “affordability crisis,” in Adler’s words. Building on the instantly founded ShiftMeals and partnering with other organizations, the company has established a variety of ways to help Vermonters who are facing food insecurity.

ShiftMeals now encompasses three programs, including the original endeavor, which served 59,992 free meals from late March through August 28, according to director Jean Hamilton. The meal program serves as a model and behind-the-scenes organizer for the $5 million government-funded Everyone Eats program, which enlists restaurants around the state to provide meals to Vermonters in need. 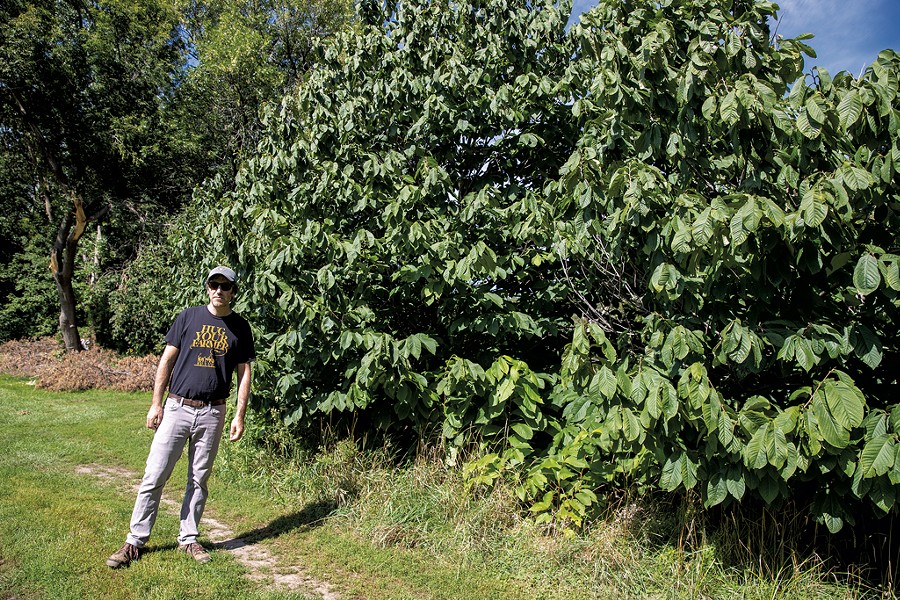 Another ShiftMeals initiative, called the BIPOC Food Sovereignty Program, is producing a six-part webinar series, “A Force to Be Reckoned With: Womxn in VT’s Food System,” that starts on September 10.

The third component of ShiftMeals, GrowTeam, is an agricultural project composed of six farms and gardens around the state, from Newport to Vershire, where people grow food for themselves and others. Each GrowTeam site was established and planted in the spring by a team of employees in collaboration with a partner organization.

Since the end of June, the GrowTeam farms have been run by a crew of volunteers and a paid garden coordinator. They share the harvest and grow food for community members and organizations, including Feeding Chittenden in Burlington and Capstone Community Action in Barre.

“It’s beautiful,” Adler said recently at a GrowTeam garden in Burlington. A partnership with the Vermont Community Garden Network, the site is adjacent to the Tommy Thompson Community Garden at the Intervale.

“I was so blown away,” he said, looking across the field of vegetables, dotted with sunflowers and zinnias. “How come it’s not always like this?” He was talking about GrowTeam’s model of growing food in a collective garden rather than the standard community garden composed of individual plots.

There’s nothing wrong with the usual method, Adler continued. “But there’s a lot right with people working together on growing food,” he said. He enumerated some of the benefits, including increasing production capacity and crop diversity to take advantage of economies of scale.

“And you’re on a team,” Adler said. “Which is a really great thing, especially these days.”

GrowTeam had to be organized and operational in four to six weeks to get seeds and vegetables starts in the ground. Adler recalled calling up farmers at night, after their field work was done, to figure out viable approaches. “We needed to get to yes without resistance,” he said.

Adler and ShiftMeals director Hamilton have been friends since Middlebury College, where he was the first person she met.

Hamilton was setting up her dorm room, playing the Grateful Dead’s Reckoning, when Adler walked by and told her it was his favorite album, she recalled. (A fan of the Dead, Adler joked with his friends about naming their original cart the Crêpeful Dead.)

“Something that I have always loved about Benjy is his pursuit of truth,” Hamilton said. “He’s such a curious and inquisitive person. He fiercely wrestles with ideas. And I think it’s served him and our community really well.”

Some two decades after that initial meeting in the dorm, which Hamilton called “formative,” the two found themselves working together on ShiftMeals.

“We looked at the situation and [recognized that] we have so many powerful resources in our facilities and on our team,” Adler said. “We’re not just going to put everyone on the sidelines and watch a crisis unfold.”

The work is a natural extension of the Skinny Pancake’s core mission to support the local food system. Before the pandemic, the company spent more than $1 million on local food per year, he said.

“We’ve always said that the local food movement has resiliency,” Adler said. “If ever we were going to demonstrate resiliency, this is the time to do it. We were going to need self-reliant, self-sufficient solutions.” 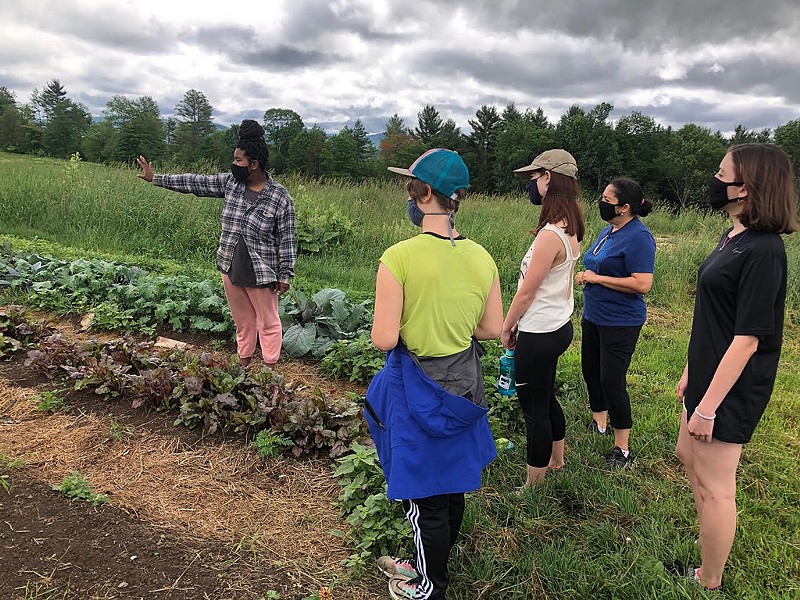 At A Center for Grassroots Organizing in Marshfield, a youth group called the Northstar Collective runs the GrowTeam garden. Eliana Moorhead, 17, of Montpelier has worked at the one-acre Marshfield farm since the spring — breaking ground, preparing the soil and planting seeds. The high school senior, who started as a paid worker earning $15 an hour, said she knew nothing about farming before this experience.

“It’s been the best thing ever,” she said. “We have a lot of conversations, beyond agriculture itself.” The group talks about land ownership, reparation and sustainability, she said.

Decisions are made by consensus, and the young farmers take the lead. “Even though there were adults [on-site], they made sure that our voices were just as powerful as theirs,” Moorhead said.

“We definitely take home food for ourselves, but we make sure that we maximize what’s given to other people,” Moorhead said.

“The amount of what we have is really amazing, and we hope to give it to as many people as we can,” Moorhead said. “That’s why we need more [harvest] volunteers, too. It’s tough to see produce ready to go and not always be able to give it to everyone.”

Moorhead applauds the Skinny Pancake for starting the GrowTeam initiative. “They’re just a restaurant,” she said. “If you have the power to change that … into other ways of providing for people in a foundational way, I think that’s really special.”

The ShiftMeals work has a variety of funding sources, Hamilton said, including grants from the Vermont Community Foundation and the High Meadows Fund. A virtual Hug Your Farmer benefit concert in June, featuring Dave Matthews and Grace Potter, raised more than $25,000.

Seventh Generation, Lawson’s Finest Liquids, the Skinny Pancake, the WaterWheel Foundation and the Restaurant Workers’ Community Foundation have donated to the program, according to Hamilton. The Intervale Center is a fiscal partner, and ShiftMeals has a contract with the Vermont Foodbank to produce meals. High Mowing Organic Seeds in Wolcott donated seeds for the GrowTeams.

When that project started, Hamilton said, she and program manager Sammy LeVine “were like a special delivery team,” driving around Vermont to pick up and deliver vegetable flats from farmers who had donated plant starts.

LeVine, 26, worked at the Skinny Pancake while studying statistics and food systems at the University of Vermont. She moved west after college and worked for a few years on farms there. Back in Burlington, LeVine lost her job as a server at Honey Road when the pandemic struck.

She brought restaurant and farming experience to her new position managing GrowTeam. As a laid-off restaurant worker, LeVine noted, she was in the “target demographic” for the program. 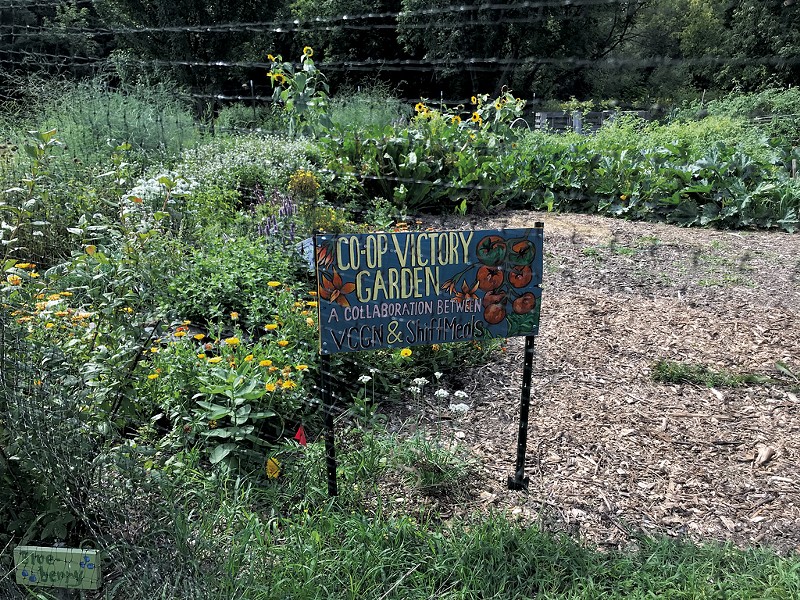 A GrowTeam garden at the Intervale in Burlington – SALLY POLLAK

“Everything was happening really fast, and this team was just responding to the immediate need of the community,” LeVine said. “It was really powerful to see what can be done when you have folks ready and inspired and willing to put in some work for the direct need of their community.”

The number of volunteers on the farms was 100 or so at the start of the season and is down to about 50, LeVine said, as people’s availability and schedules have changed.

“In my experience, the more you connect with the earth and get in the garden, the more you want to be there,” LeVine said. “And it doesn’t really feel like a hard commitment.”

One volunteer is Joanna May, a music teacher from Richmond who lost her preschool teaching jobs to the pandemic in the spring. With experience in community gardening and farming — and time on her hands — May, 51, applied to GrowTeam to help address food insecurity.

She started as a paid employee in Burlington and has since moved to the Richmond site, where she volunteers for GrowTeam’s partnership with the Vermont Youth Conservation Corps. The VYCC’s 10-acre farm produces food for Health Care Share, a CSA that’s free for about 400 members. May brings home a weekly allotment for her family.

“I think it was a brilliant use of PPP money for the Skinny Pancake … to employ people to get the food systems back in action,” May said. “Restaurants really have the connections and the networks to keep farmers producing. There’s just no reason that we should have food waste when we have hungry people.”

“The pandemic just kicked our asses into fuller gear and a stronger commitment.”BENJY ADLER

Adler wants the program to serve as a model for more collective farming projects to be established around the state — the foundation of what he called “reciprocal food security.”

“I hope to be a pest and help foster the scaling up of the program,” he said, adding that he runs by land in Burlington that could support a 1,000-person CSA. “I do harbor a particular concern for affordability in Burlington. I’d like to be part of the solution.”

As the crops grew in the spring and summer, the Skinny Pancake gradually reopened five of its restaurants. In mid-July, a new crêperie opened in Stowe, one of the three restaurants Adler had planned to open in 2020; the others were in St. Albans and Troy, N.Y.

The pandemic has slowed but not deterred Adler’s mission to build his restaurant group and strengthen local food systems in the process. The crisis underscores his commitment to addressing problems “at scale.”

“If a bunch of soulless, greedy corporations with crappy products can scale up and have negative impact, then who’s stepping up to the plate to counter that using all those same skill sets to scale and have a positive impact?” he said. “The pandemic just kicked our asses into fuller gear and a stronger commitment.”