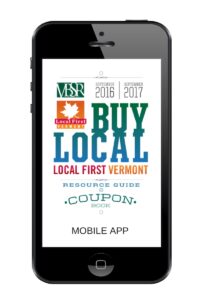 Vermont Businesses for Social Responsibility (VBSR) happily announces the launch of the Local First Vermont Mobile App, just in time for the holiday shopping season. Free to download through the App Store and Google Play, the app serves as a mobile version of the well-known Buy Local Resource Guide and Coupon Book, which is published annually by VBSR.

The new app gives people access to more than 200 coupons on their smartphone or tablet. “We’ve been publishing the Buy Local Book for 7 years now,” said Wendy Wilson, manager of Local First Vermont. “People love using the book to support local businesses and save money, but at 250 pages, it’s not always convenient to carry around. The new app will appeal to a broader demographic and make it easier for people to buy local, bolster Vermont’s economy, and save money.”

“When you look at the changing world, creating a mobile app for these coupons makes so much sense,” said VBSR’s executive director Jane Campbell. “On top of that, we as an organization want to lead by example when it comes to things like the environment. If there is a way for us to print fewer books while still encouraging the support of local businesses, we need to try to move that direction. Having an app for the book and these coupons makes both business and environmental sense.”

Wilson also noted that the app has already helped Local First Vermont’s expansion efforts. “This year, we have expanded the geographic reach of our book into six new towns. As we began expansion into to Brattleboro, Manchester, Rutland, Stowe, Woodstock and the Champlain Islands, local businesses were excited to hear that they would be included in both the book and the new Local First App.”

VBSR soft-launched the Local First Vermont mobile app in September 2016 via the App Store and Google Play. Since then, about 120 Vermonters have downloaded the free app. Once downloaded, subscribers pay a one-time, $20 fee to unlock 230+ coupons valued at more than $3,000. All coupons are good through September 1, 2017.

Wilson has been thrilled with the initial response to the app and believes it says will eventually be more popular than the printed book. With features like being able to sort coupons based on a users current location, she hopes users of the app will “never forget their Buy Local Coupons again.”