Mike Reilly Photo From left, Sas Stewart and Will Flemming of Stonecutter Distillers work at VBSR’s June Get-Together in Hinesburg.

HINESBURG — Guests were treated to an ideal early summer evening when Red Wagon Plants in Hinesburg hosted a Vermont Businesses for Social Responsibility (VBSR) networking Get-Together in June. If that wasn’t enough, they also enjoyed pizza from the “wandering wood-fired pizza oven” provided by One Hearth, a food truck and catering business located in Burlington’s Old North End. 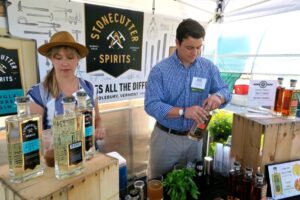 From left, Sas Stewart and Will Flemming of Stonecutter Distillers work at VBSR’s June Get-Together in Hinesburg.

Red Wagon Plants owner Julie Rubaud said, “I’ve been selling plants for 22 years, the past 11 at this location as Red Wagon Plants. Our primary focus is edible gardening, but every year we seem to grow more and more ornamental plants, annual flowers, perennial flowers, and shrubs. We have 36 wholesale accounts all over Vermont and into New Hampshire.”

Rubaud said she was fortunate to have incredibly loyal customers and staff. “I have people that have worked here for 15 years, and in seasonal agriculture that’s really rare and remarkable.”

While her business started as strictly wholesale, Rubaud launched on-site retail about 10 years ago.

“When I moved to this location, I thought I’d just keep it wholesale, but it’s a perfect retail location,” she said. “That first year here people kept driving in and asking if they could shop. At first, I’d say. ‘No,’ but realized that was just silly. So we quickly built another greenhouse to accommodate retail.”

“It’s funny, but I come from a restaurant and hospitality background, and we kind of treat our customers like you would at a restaurant,” Rubaud said. “We take really good care of them.”

Red Wagon now has two greenhouses dedicated to retail, among nine total greenhouses on the property.

“One thing that’s unique about us is we grow nearly everything we sell — we don’t buy-in anything and resell it.” Shrubs are one exception. “We do grow some of our own here, but we also work with Cobble Creek Nursery in Monkton.” Rubaud said her plants are certified organic. “That’s also pretty rare in the horticulture industry, which is a fairly chemical-intensive industry.”

From left, Al Levy and Tucker Levy of One Hearth Food Truck and Catering smile for the camera at the June Get-Together

Networking activities were centered in an area recently designed as a new event space. Rubaud said the space could enable Red Wagon to host private or corporate dinners or other special events, including small weddings or rehearsal dinners.

“We might have a pavilion or tent, maybe an outdoor pizza oven on-site,” she said. “The space might be available to rent, or for events we sponsor. We’re still working it out, but it’s inspiring space with a beautiful view of Camel’s Hump, and I’m really excited about it. Tonight’s kind of a test-run.”

Stonecutter Spirits, a new VBSR member, was on-hand promoting its products. Sas Stewart said, “We are a craft distillery in Middlebury, and we’re not just new members but also a new business. We opened less than a year ago. We focus on aging, combining different barreling practices from around the world to age gin and whiskey.” Stewart said Stonecutter offers a unique spin on each.

Heritage Cask Whiskey, Stonecutter’s newest product, was set to launch the day after the Get-Together with a major release event in Middlebury.

“It’s a combination ofdifferent heritage aging techniques from around the world, but it starts with the core of an American bourbon,” Stewart said. “It’s distilled like a bourbon in Kentucky, we bring it to Vermont and age it like an Irish whiskey, and finish it like a Scotch in cabernet barrels. 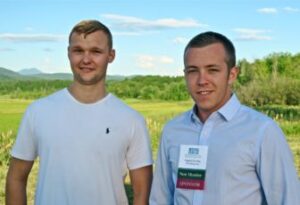 Jack Farrington and Frankie Dowling of Office Squared pose for a photo at the VBSR event.

“And coffee,” Dowling noted. “Another thing that sets us apart is solar powered desks — they’re gorgeous.”

A variety of short-term and custom leases are available. Dowling said offices are private, with doors that close, as opposed to the more congregate settings offered at some co-working offices.

Dean Watson of Death Before Decaf said his product is about to get much broader distribution in Vermont.

“Right now we’re in about 12 stores,” he said, “but July 1st we go live with Farrell Distributing and will be in stores all over the state.”

Watson said the concept of Death Before Decaf is, “To make a really good cold, brewed coffee, without cream and sugar, that’s readily available in a bottle that you can take anywhere.”

He said his company partnered with Mocha Joe’s in Brattleboro, which he described as “one of the most social-responsible coffee producers in the world.”

Dan Cahill was in charge of sound and DJ services for the evening, representing Wedding DJ VT in Burlington.

“Contact HTTP://WWW.WEDDINGDJVT.COM for any musical needs. We can DJ weddings, club events, or corporate events and are about to launch a sister company — Wedding Band Vermont — that can put you in touch with musicians for live music for events.”

Jess Hyman, executive director of Vermont Community Garden Network, said, “We are a nonprofit that works with community and school gardens all over the state. There are nearly 400 community-based gardens in Vermont. They are located in neighborhoods, cities, schools, housing sites, prisons, workplaces, senior and daycare centers — basically anyplace people are growing food together. We’re helping them make it happen.”

Hyman said her organization has a strong partnership with Red Wagon plants, from donated plants to technical support from staff.

“It all helps with our mission to create and support a vibrant community garden network to help more people grow food for themselves, their families, and their neighbors.”

“We’ll be hosting a VBSR Get-Together at our offices in Fort Ethan Allen in Colchester in January to kick-off our celebration. We look forward to sharing how we partner with local businesses to bolster the social component of the triple bottom line.”

“We partner with local businesses, across industries, to help them strengthen and diversify their workforces.”

Aimee Frost of KSV in Burlington said, “We are a marketing company focused on energy, which is an exciting place to be, particularly in Vermont. We work with energy service providers throughout New England and nationally, so it’s a really exiting time for us.”

A connections director for KSV, Frost focuses on connection strategies.

“We work with clients to connect all their media activities,” Frost said.

Sue Ryan of the Vermont Child Care Industry and Careers Council said, “We sponsor professional development for child care workers across Vermont. Our keystone program is the Child Care Apprenticeship Program, working closely with the Vermont Department of Labor and area childcare employers. We’re currently gearing up for our fall semester.”

“To keep our state as pristine as it is now the facts are we need to keep our carbon footprint below 350 parts per million,” he said. “So we’re about educating folks about what it’s going to take to do that, and building the grassroots network that it takes to push the statewide change in culture needed to do it.”

Mischul Brownstone is a certified Feldenkrais practitioner. He was promoting his work at the event through a concept of “less is more.” Using an “awareness through movement” approach, Brownstone works with individuals to achieve functional integration. He says becoming aware of the connection between movement and awareness can increase flexibility and movement and ease physical pain.

“We cultivate your ability to think more — to become more intelligent, more relevant,” he said. “People may come in with a bad back or because they want to run better. But we’re actually in the business not of more flexible bodies but more flexible brains.”

What did members say they wanted less of? “Nothing,” Campbell said. “They said they love VBSR and just want more!”

“They have a brand new building, and I’ve had a sneak preview and it’s just gorgeous inside,” she said. “Plus, they always do good parties.”

Business Vermont roving reporter Mike Reilly offers regular coverage of Chittenden County business networking events, with notes on events, hosts and sponsors, with news and snippets from those in attendance.
For events sponsored by Vermont Businesses For Social Responsibility, check the website at www.vbsr.org