Continuing its 10 year focus of providing solar power projects to Vermont schools, Norwich Solar is pleased to announce that the Danville School, Cabot High School and Twinfield Union School will be receiving Net Metering Credits from a 500 kilowatt solar project built next to the Danville School. The solar project will further enable the schools’ support of renewable energy and associated educational opportunities for students. Danville resident Doug LaMothe is hosting the array. Installation of the project will be completed this year. 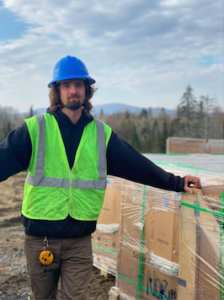 The schools are enrolled as customers of the project through a Net Metering Agreement. This agreement provides the schools long-term savings with no upfront costs or operational obligations. The net metering credits generated will be applied to the three schools’ Green Mountain Power electric bills each month, and will save approximately $500,000 in electricity costs over the 25 years.

Mark Tucker, Superintendent at the Caledonia Central Supervisory Union stated, “Danville, Cabot and Twinfield Schools are pleased to be in partnership with Norwich Solar and to be sharing the output of a solar farm with their sister schools in Caledonia Central SU. All three schools had looked into solar as an energy source in the past. Those past investigations had always floundered when it came to answering the question of siting: ‘Which part of the campus was best suited for a solar array? Should we put it on the school roof? Can we put it on the roof?’ Net metering resolved the siting question for us. When presented with the opportunity to garner the financial benefits of solar by participating in a planned solar farm to be built in Danville, with no upfront investment to the school districts, the respective Boards all saw this as a deal too good to pass up. We look forward to the Danville Solar project coming online so we can start saving money on the electricity costs in these three Districts, savings that will be passed on directly to our taxpayers in the form of reduced energy costs for the three schools.”

Norwich Solar in partnership with and financing from Mascoma Bank is currently completing construction of the array. This type of public / private partnership leads to more local economic development by leveraging federal tax dollars into the Vermont economy. The clean energy generated from the solar project will be fed directly into the Green Mountain Power electric distribution system which benefits all Vermonters, and the Renewable Energy Credits (REC’s) produced by the solar project will be transferred to the utility helping Vermont achieve its in-state renewable energy goals.

Vermont currently generates the least amount of electricity of any state (less than half of our electricity is generated in state) and imports >$2B of energy each year. The school’s support of projects like this – grow local investment, create local jobs, and generate more local clean electricity.

RunTime Solar, a division on Norwich Technologies, will be providing operations and maintenance over the life of the project.

A Compass for Just and Regenerative Business