Green Executive Order is Good for Business and Taxpayers 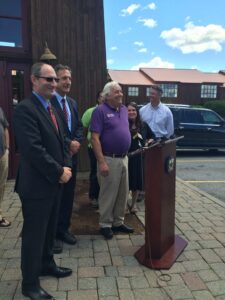 Vermont Businesses for Social Responsibility on Tuesday praised a move by Gov. Peter Shumlin that will level the playing field for green and environmentally-friendly businesses bidding on state contracts.

The executive order announced by Gov. Shumlin gives businesses with strong environmental records and policies a preference when bidding on state contracts for goods and services, the organization said. Under the executive order, the state will consider a company’s thermal and electric efficiency, use of renewable energy, efforts to reduce carbon emissions, and other green benchmarks in awarding state contracts.

“Hundreds of businesses across our state make protecting our planet an important part of their mission through energy conservation, renewable energy and reduction of their carbon footprint,” said Don Mayer, the CEO of Small Dog Electronics. “I am thrilled that Gov. Shumlin is putting the state’s money where its mouth is and recognizing the essential leadership of businesses in combating climate change.”

“Favored consideration in state contracting for businesses with green environmental records is also in tune with the state’s carbon reduction and renewable energy goals,” noted Daniel Barlow, the public policy manager at VBSR. The state has statutory goals of greatly reducing greenhouse gas emissions and using 90 percent renewable energy by 2050.

VBSR has long believed that Vermont can better maximize the economic development potential of state spending and contracting by giving bidding preferences to companies that have strong environmental ethics and provide well-paying jobs with good benefits to their employees. The lowest bid for a contract is not necessarily the best bid, especially if it goes to a company that pollutes the environment or has wages so low that their employees qualify for public assistance, Barlow said.

“This executive order will help move the market toward more environmentally-friendly practices,” Barlow said. “It makes no sense for the state to contract with companies that leave legacies of pollution behind and create costs that the public is often asked to pay for long after the project has been completed and the company has washed its hands of the situation. This measure ensures that Vermonters are getting good value for their taxes.”

The organization said it plans to work with the next Vermont Governor to ensure that the executive order remains in place in the transition between administrations.