The 2022 legislative session in Vermont has come to an official close and we have a lot to review! As always, VBSR has been advocating on behalf of our members to bring their innovative, entrepreneurial, and community-driven spirit to the halls of the statehouse, inspiring policymakers to put people, planet, and prosperity at the heart of their decision-making.

Join VBSR, Senate President Pro Tempore Becca Balint, and Vermont Speaker of the House Jill Krowinski to hear more about the key victories and pitfalls of the 2022 legislative session. From tackling the climate crisis and promoting environmental justice to revitalizing our workforce and downtowns, hear firsthand accounts from activists and lawmakers about the critical role businesses can play in the galvanizing change. 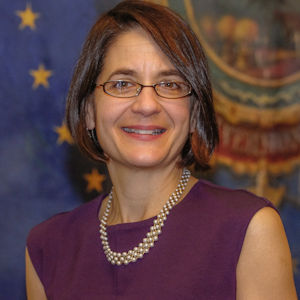 Becca Balint of Brattleboro was elected President Pro Tempore of the Vermont Senate on Wednesday, January 6, 2021. She is the first woman and first openly gay person to hold the position. She serves Windham County. Her career in education has been spent teaching in public and private schools in New England, as well as at the Community College of Vermont. She first moved to Vermont in 1994 to lead rock climbing trips at the Farm and Wilderness Foundation in Plymouth and relocated permanently to Vermont in 1997. Becca was elected to the Vermont Senate in 2014, and during her first term she served on the Committee on Institutions and the Committee on Economic Development and Housing, as well as the Judicial Rules Committee. During her 2nd term she was made vice chair of the Committee on Education and continued to serve on the Committee on Economic Development. In 2016, she was elected to the position of Senate Majority Leader and was also appointed Chair of the Senate Sexual Harassment Prevention Panel. In her 4th term she was elected to the position of President Pro Tempore. Becca’s successes as Majority Leader include shoring up the votes to pass the largest Vermont housing bond in decades, which secured much-needed housing for hundreds and hundreds of Vermonters, and passing a minimum wage increase for thousands of low-wage workers. Becca also led the caucus through a successful fight for the most progressive reproductive freedom legislation in the nation, and she worked hard to pass the boldest climate justice bill to date in our State. Over the years, she’s also fought for protections for consumers, for renters, and for women in the workforce, and she’s been a strong advocate for additional workforce training programs that will assist Vermonters and small businesses. When she’s not running around the State House, she’s running in Hubbard Park. Becca lives in Brattleboro with her wife, attorney Elizabeth R. Wohl, and their two children. 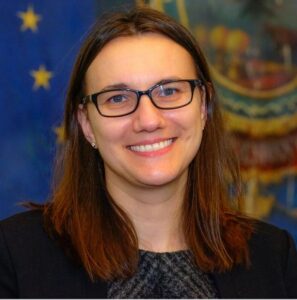 Jill Krowinski of Burlington was elected Vermont Speaker of the House on January 6th, 2021. She is the 92nd Speaker and fourth female Speaker of the House.
Jill has served in the House since 2012 and was elected as House Majority Leader in 2017. Krowinski has experience working at non-profits and serving on community boards. Jill has served as the Executive Director of Emerge Vermont, an organization dedicated to increasing the number of Democratic women in public office through recruitment, training and providing a powerful network. Previously, she worked at Planned Parenthood of Northern New England, her last role as the VP of Education and VT Community Affairs. Krowinski also served as a Commissioner for the Fletcher Free Library, Vice Chair of the Health Care Oversight Committee, Chair of the Vermont Child Poverty Council, and is currently an Advisory Committee member of Emerge Vermont. She also has served as a delegate for the American Council of Young Political Leaders in the Philippines. Krowinski is a graduate of the University of Pittsburgh.